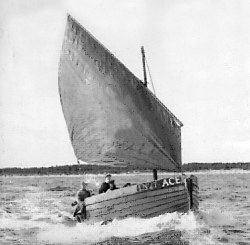 A lot more could have been written in the book 'Wells next the Sea - A Small Port and a Wide World' about fishing, particularly in the twentieth century. The story of trawlers in particular could be enlarged. Steam and then motor trawlers came and went in the nineteenth century. They returned after both wars, during which they had been employed variously as minesweepers and cargo vessels. Both wars virtually brought an end to deep sea fishing in the North Sea; stocks of all varieties of fish increased massively; but in both cases the return of trawling at the end of hostilities quickly reduced stocks to below commercial levels, overfishing once again. The problem was made worse by the advent of foreign trawlers whose activities close to the shore were only occasionally policed. Not only did the trawlers empty the seas of the cod and herring which local fishermen had formerly caught; they also could destroy whelk pots as they trawled in the dark over the whelkers' lines. Paradoxically, however, the loss of cod stocks caused by trawling gave a greater opportunity to crabs on which the cod feed at certain times of the year.

The story of the Wells whelk fishery was told by 'Loady' Cox, David Cox's uncle, who was born at the turn of the 20th century. Most, but not all the fishermen, were from fishing families, and not all were local to Wells. Loady's father came from Sheringham, 'Shannocks' as they were called. He was one of many who moved from that crowded fishing environment in the 1890s, some moving south to Whitstable, taking their whelking skills with them, some, like Cox moving to Wells. At first, these outsiders were resented and even had stones thrown at him when the returned from fishing. Only gradually were they were accepted. He married a local girl and had eight children, sailing out to sea in a square rigged boat sometimes with a mizzen and foresail if the wind directions warranted it, until 1915 when motor boats came in. Loady was at sea by the age of ten and working by the age of 14. 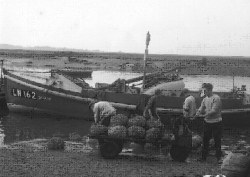 Herring, mackerel , and cod were fished in winter, sailing in double ended boats of up to 20 feet in length overall. (Former lifeboats came into use in the 1950s.) After the Second World War other outsiders also started filtering into the business, though this didn't weaken the clannishness of the fisherman. Street fighting, usually between the fishermen and the sons of the shopkeepers and farm labourers from the west end, had become a spectator sport for the young most often on a Saturday night. The fishing families were mostly found around Jolly Sailors Yard, close to the Shipwrights Arms, a focal and meeting point. 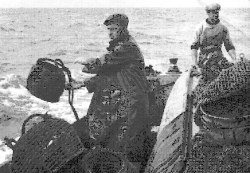 Selling fish was always problematic, partly because of the distance from Wells to London or Grimsby. Even the advent of sprat fishing required large quantities, measured in tons, to justify the transport costs. Billingsgate, the destination of whelks always presented an uncertain price. Porters could not always be trusted.

Fishing for crabs and lobsters, which began in the 1980s and still flourishes, is not much different a practice from fishing for whelks. Baited pots in long shanks are used though with bigger boats there can be up to fifty pots on a shank. The whelks, which seemed to have gone, have returned, but the tiny but ferocious velvet crabs, popular only a few years ago for the export market, now command no sale and have, in any case, large disappeared.