The Fall of the Yarmouth Suspension Bridge

The Fall of Yarmouth Suspension Bridge: A Norfolk Disaster 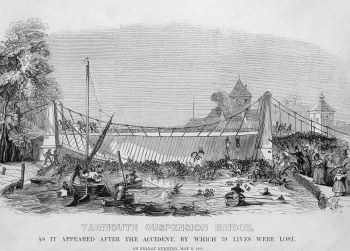 The Fall of Yarmouth Suspension Bridge: A Norfolk Disaster explores this terrible 19th century event in which 78 lost their lives. Along with the Tay Bridge Disaster, it can be seen as one of the worst engineering bridge failures of the century. The author, Gareth H.H. Davies, explores all aspects of the disaster up to the present day including its legacy and memory.

These 'Support and Resource' pages extend the scope of the book by providing additional evidence and depth that readers might like to explore.

Aspect 1: The Victims
Here the author has put together details of the victims using a variety of sources and compiled them into a useful list. If you're interested in family history, and suspect you might have a relative who died as a result of the disaster, then this is the place to start.

Aspect 2: The Cause of the Collapse
This section will be of interest to the engineers among us who might like more detail on the reasons for the collapse. It includes the original specification given to the builder, which gives a lot of detail on how the bridge was constructed, as well as accounts of the evidence given by the civil engineer, sent by the Home Secretary, to the Coroner's jury and his report to the Home Office.

Aspect 3: Newspaper accounts and reporting
Newspapers accounts can be used to provide contemporary accounts of events in the 19th century. In particular, Coroner's court transactions hardly ever survive and newspaper reports of inquests are often the only surviving record of how juries came to decisions about the death of an individual or individuals. This aspect explores how local and national newspapers reported the events of May 1845. By contrasting the two, one can gain an insight into the the 'said' and 'unsaid' aspects of the disaster.

Aspect 4: Interactive Tour
There are a number of places you can visit in Great Yarmouth today with a connection to the suspension bridge disaster. This interactive map provides an opportunity to explore those remaining sites.