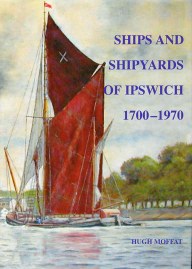 As long ago as 1294 the shipwrights of Ipswich were building a galley for the King's navy, and the town on the Orwell continued to be a leading ship-building centre until the 20th century. Schooners, brigs, ketches and the great Indiamen were amongst the vessesls built over the years. The author opens a window on a significant part of the town's history.
Hugh Moffat's ancestors include several Ipswich mariners, so it need occasion no surprise that a maritime interest began to grow when he was in his teens. This book makes a major contribution to the maritime history of an anceint east coast port.