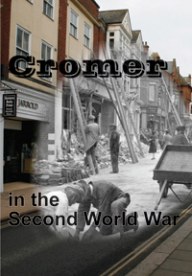 Cromer in the Second World War is a DVD that brings together many memories of those wartime years and illustrates them through photographs and film taken at that time. It features modern footage taken to show the sites today and mixes them with the recollections of those who were resident in the town and some who made a temporary visit.

One of the latter is Flight Sergeant Jim Flint who when piloting his damaged aircraft back across the North Sea realised he could not climb over the cliffs at Cromer and ditched into the sea. Another is renowned American radio journalist Norman Corwin, who came to investigate the effect of enemy bombing on a small town community.

The full DVD runs for 70 minutes and you can view a trailer below: