The Great Market: A survey of Nine Hundred Years of Norwich Provision Market 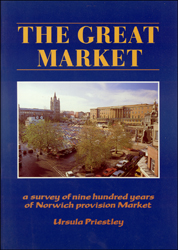 Throughout the nine hundred years of is recorded history Norwich has been a leading regional capital, a premier market town and a centre of trade and commerce. Geographically, the city was a natural distribution point for the agricultural produce of much of East Anglia and it was also the major outlet for a large community of urban craftsmen, as well as the mart for many merchants from this country and overseas. The huge provision Market, on which most of this trade was focused, was famous for its size and for the diversity of of merchandise on sale, making it a tourist attraction long before the twentieth century. The eighteenth century historian Francis Blomefield, describe it as 'the grandest market in all England'.

Ursula Priestly draws on many sources to bring us a picture of the market over the centuries.