east anglian history books
Poppyland
Publishing
authors
back
<
I Wanted a Boat—So I Built One: The story of the Emery boatbuilding business
Through Fire and Flood - Saving Norfolk's Archives
Sedgeford Aerodrome and the aerial conflict over North West Norfolk during the First World War
New Buckenham: a planned town at work 1530 - 1780
Millgate
>
also recommended

Land of the Iceni: The Iron Age in Northern East Anglia 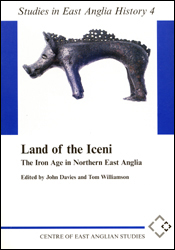 Iron Age studies have traditionally focused on Wessex, with its imposing hill forts, or on the Hertfordshire/Essex area, with its late Iron Age oppida and wealthy burials. In contrast, the 'land of the Iceni' - Norfolk, the northern part of Suffolk, and north-eastern Cambridgeshire - has, until recently, languished in obscurity. But excavation, fieldwork and the analysis of artefacts are now casting new light on the later prehistory of the neglected region.

Much of the research is presented here for the first time. Coinage, the landscape, the character of settlement and the agrarian economy are among the many subjects discussed by a distinguished collection of archaeologists and edited by John Davies and Tom Williamson. Together these essays provide the basis for a thoroughgoing re-evaluation of the Iceni and their territory.