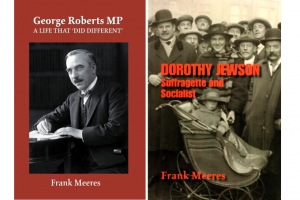 George Roberts was born in Chedgrave in 1868, the son of a shoemaker, and became the first Labour party Member of Parliament in East Anglia. He rose to become the party’s Chief Whip and was one of the very small number of Labour MPs to serve in wartime Governments under David Lloyd George. He become a cabinet minister and a privy councillor, serving in vital roles as Minister of Labour and then as Minister of Food. After the war, disillusioned with the Labour Party, he stood for Norwich as an Independent candidate – and won. He then finished his journey to the right, becoming a Conservative MP.

Dorothy Jewson - Suffragette and Socialist is the biography of a remarkable and determined Norwich suffragette, socialist, city councillor and one of Britain's first female Members of Parliament. Born of a Norwich business family in 1884 and educated at Norwich High School for Girls, it was at Girton College, Cambridge that her lifelong commitment to socialism and feminism was established. She fought in the battle to establish votes for women, being one of the first Norwich members of Emmeline Pankhurst's Women's Social and Political Union and went on through life committed to working for the disadvantaged through direct action in running a workshop in the First World War, through local and national politics and through Norwich City Council as it developed amenities in the city between the wars.