The Inns and Taverns of Great Yarmouth and Gorleston 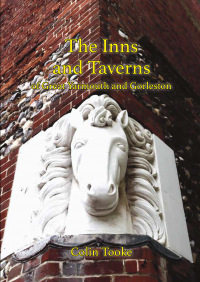 Inns first appeared in the fourteenth century and were intended to provide food and rest for pilgrims. They soon welcomed any traveller needing to find accommodation for himself and his horses. A good inn had a staff of servants under a cheerful landlord, chamberlains or chambermaids, to show the traveller to his quarters, and an ostler to take care of the horses. There was no bar as we know it today and drinks were brought in on trays. Examples of these can still be found in Yarmouth today. At the Dukes Head on Hall Quay the entrance to what was originally the inn-yard still has the protective iron kerbs to guide the coach wheels through the arch. The tavern did not provide accommodation like the inn and was the forerunner of the music hall. Before the days of music licences many taverns utilised a large room, often equipped with a stage, for concerts and other entertainment. These were to be found in Yarmouth market place—the Angel, the Half Moon, the Bull and several others. The tavern was allowed to sell beer and wine to all sections of the public, whereas the inn was restricted to sales to residents only. Ale houses or beerhouses, sometimes referred to as 'tippling houses', were private houses where beer was brewed in the kitchen and often retailed in the front room. In 1586 the number of 'tippling houses' in Yarmouth was restricted to 16, a figure that had increased to 120 by 1705. By the nineteenth century, when the temperance movement was strong in many parts of the country, Great Yarmouth does not seem to have been one of their most successful strongholds. No doubt the large seafaring population of the town did not take kindly to the temperance movement. However, the growth of the holiday trade meant that there was money to be made from those that had taken the pledge and the first temperance hotel opened in 1891—the Cromwell on Hall Quay, now the Star Hotel, soon followed by the Brunswick in King Street.

In this book Colin Tooke, explores the inns, taverns and beerhouses of his home town— their origins in the Middle Ages, how they adapted to become public houses, music venues and restaurants and, more recently, converted to residential accommodation as the tourist industry declined. Finally, he looks at the problems caused by the 2020-2022 pandemic when public houses closed and many have not re-opened. His meticulous research and photographic collection make this an extensive history of drinking houses in this Norfolk coastal town.