I Wanted a Boat—So I Built One: The story of the Emery boatbuilding business 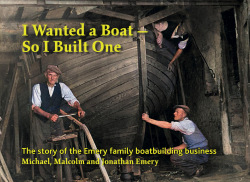 The Emery family's voyage into boatbuilding began in around 1850—through a combination of necessity, determination and enterprising 'diversification' of carpentry skills into a new arena… on the high seas.

Lewis 'Buffalo' Emery was the son of Benjamin, a Norwich 'carrier' cart driver, and Sarah Grimes, who lived at East Beckham. He became a carpenter and fisherman who around 1850 wanted a new boat but could not get anyone to build him one.

So he decided to build himself a boat. And it was a good one. Other fishermen were soon asking if he would build them a boat too, which saw him switch from fishing and go into boat building full-time.

Thus began four generations of boat-building in Sheringham, set to continue for building to 1957 and repairing to 1981. The Emery family is proud to record here their heritage, with words and pictures brought together by Michael, Malcolm and Jonathan. Photos from the family archives and other contributors are a unique record of a part of Sheringham history.