east anglian history books
Poppyland
Publishing
authors
back
<
King's Lynn: A Port for a Thousand Years
Poppyland - Strands of Norfolk History
A School Through Time: 200 Years in the life of Antingham and Southrepps School and its people
Wymondham: A Pleasant Place
How Norwich Fought Against the Plague: Lessons from the Past
>
also recommended 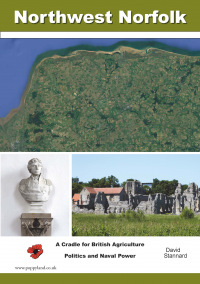 The northwest corner of Norfolk is a very important agricultural region; with a large-scale arable and grassland landscape and some areas of mixed farming, where pigs and sheep comprise the dominant livestock. With no heavy industry, what little industrial activity exists in the region is mostly concerned with food production. With myriad evidence of Neolithic, Bronze Age, Iron Age, Roman and Anglo-Saxon occupation here is a region which was exploited, and defended, by the earliest farmers of Britain. But the landscape that we see today was largely created by forward-thinking 17th and 18th century innovative yeomen farmers, who in enclosing their lands, oversaw significant change that brought about the modern independently-run agronomy of the 21st century.

David Stannard provides a history tour of this region whether following the course of its rivers to lost and deserted villages or examining the role of three sons of northwest Norfolk. It is their large landed-gentry estates that shaped the modern agricultural economy, our modern political system and even today their work lies at the heart of this region.