Wells in Pictures: Then and Now 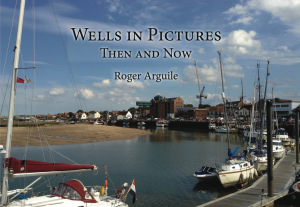 Wells-next-the-Sea has become a much admired holiday resort. Its character is, in good part, due to its having been for a long time a port, fishery and industrial base. Now known for its shellfish - crabs, lobsters and, of course, whelks, fishing has been a regular and important trade throughout its history. In the 19th century malting became a huge industrial and commercial enterprise until its collapse in 1929. Agricultural related industries continued until the 1990s when the coasting shipping ceased.

In the past fifty years many of the signs of its industrial past have disappeared, apart from the Granary built by F & G Smith in 1904 to store and facilitate the export of barley and malt. This building still dominates the quayside—today providing high-class accommodation with fine views over the estuary. It represents both the old and new.

In this book the author has gathered together a collection of photographs from the past and present that puts the town into its historical perspective. Buildings survive because they are used for new purposes, sometimes retaining evidence of their former life, sometimes not. This book provides the reader with some of those clues if they wish to look.