east anglian history books
Poppyland
Publishing
authors
back
<
Wells next the Sea - A small port and a wide world (Ppbk)
Scholars, Saints and Sinners: the stories of some of Norfolk's more idiosyncratic clergy of the 19th and early 20th centuries
The Last Haul: Recollections of the Days before English Fishing Died
The Photographs of William Rayson Smith Volume I: Norfolk and Beyond
Kett 1549: Rewriting the Rebellion
>
also recommended 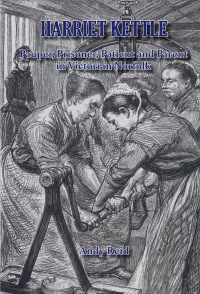 Harriet Kettle (c1838-1916) was a rebel against authority in Victorian times. She lost her mother and, abandoned by her father, grew up in the workhouse. Imprisoned several times and committed as a lunatic on five separate occasions she eventually got married and had four children. Stating on one occasion that, 'no man would conquer her', her final act was to take a wealthy businessman to court. A case she won.

This book explores in depth the contexts in which Harriet's life was lived: the village of Cranworth, Gressenhall Workhouse, the courts and yards of Norwich, Walsingham and Wymondham Houses of Correction, the Norfolk County Lunatic Asylum, the Bethlem Hospital in London and Toftwood, a suburb of East Dereham. In so doing, it provides a vivid picture of the grittier sides of life in Victorian times.