east anglian history books
Poppyland
Publishing
authors
back
<
Exploring the Norfolk Market Town
The Norfolk Dialect
Caister-on-Sea: 2000 Years a Village
Land of the Iceni: The Iron Age in Northern East Anglia
A School Through Time: 200 Years in the life of Antingham and Southrepps School and its people
>
also recommended

The Photographs of William Rayson Smith Volume I: Norfolk and Beyond 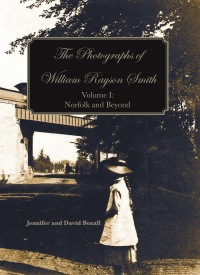 Many have an old photograph album that has been handed down in the family through the generations. Often studio portraits, sometimes we know the people shown through annotations in the album or the research of a family member. We might also be familiar with the photography of professionals in the 1880s through postcards or collections, but it is rare to come across the work of an amateur photographer whose plate photography captured both everyday and family life in the period. It might be for this reason alone that William Rayson Smith's albums are unique, however, his photographs, nearly all of which have never been seen before, provide us with a special glimpse into the past.

William Rayson Smith hardly left his native land being baptised in Dickleburgh Church in 1841 and dying only five miles away in Harleston in October 1932. Apart from a decade in Belleville, Canada, where he acquired a taste for the new technology of photography. Purchasing a camera he was to spend much of the late 1880s photographing what he saw around him. The result is a special collection of distinctive photographs covering Norfolk and beyond.

This first volume provides around 130 photographs from that collection. While highlighting the area around Harleston in particular, they also show visits to family, as far afield as Newmarket, Woodbridge, Sheringham, Great Yarmouth and Lowestoft, as well as his early work in Canada. The authors' careful research into Smith and his family adds background to the collection.

A second volume is in preparation using his Lowestoft photographs.

Look Inside the book