Edwin Gooch: Champion of the Farmworkers 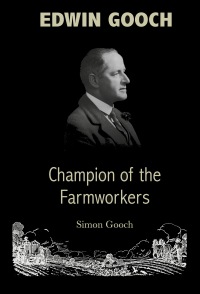 Edwin Gooch was a significant figure in agricultural trade unionism and Labour Party politics in the mid-20th century. After setting up South Norfolk Labour Party in his native town of Wymondham in 1918, he helped elect George Edwards MP; then came to prominence himself in the 1923 Great Strike of Norfolk farmworkers. As President of the National Union of Agricultural Workers from 1930, he served for almost 35 years in an honorary but influential role, and in 1945 he was elected MP for North Norfolk, becoming Party Chairman ten years later. He led the fight for decent wages and conditions for farmworkers, and campaigned against the tied cottage, with support from Labour heroes George Lansbury, Clement Attlee and Aneurin Bevan.

In this book, his grandson, Simon Gooch, draws on his late father’s reminiscences, his own childhood memories and archival research—often using Edwin’s own words from the NUAW’s journal The Land Worker. The language of political debate comes back to life, creating a vivid portrait of a man whose strong Norfolk accent once rang around the House of Commons.