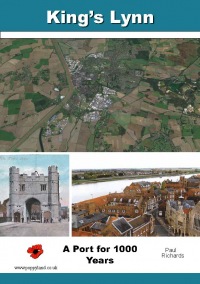 King's Lynn is the second largest town in Norfolk with its origins dating back to Saxon times. Situated on south-eastern corner of the Wash, an estuarine lake known as the 'lin', salt was produced from the evaporation of sea water boiled in pans over peat fires. Waste discarded from these salt works raised the level of the land pushing the high tide mark towards the sea thus shrinking the lin and so grew a harbour market with European and British merchants arriving by sea in the summer and pitching tents. Around 1100 Losinga, Bishop of Norwich, recognised it as a settlement and it became known as Bishop's Lynn until the time of Henry VIII when it changed its name following the corporation being invested with governing powers.

This booklet, written by one of the town's foremost historians, looks at its history up to the present day.