Norfolk and Suffolk Churches: The Domesday Record – A Handbook for Reference and Use 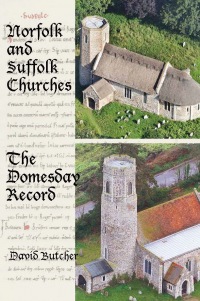 Norfolk and Suffolk have far more places of Christian worship than any other English county with the exception of Lincolnshire. Their pre-conquest origin and location can often be revealed by careful examination of William I’s great survey. However, when confronted with the mass of data presented, the Domesday text can appear ambiguous or contradictory to the historian. In this book the author has painstakingly arranged the data into tables to provide a unique research tool for those interested in the existence of a place of worship during the Anglo-Saxon period. It is meant as a handbook to assist investigation into the location and distribution of the churches recorded within the document.

In addition to presenting data for each church, the author further encourages the reader to engage in his/her own research into a locality by providing a model study of one particular area of Suffolk: the half-hundreds of Lothingland and Mutford. He also investigates the valuation of church land-endowments, parishes with round-tower buildings and the presence of freewomen as land-holders, examining their potential role as founders of churches or as encouragers of other people to establish them. He proposes that, in contrast with Norfolk, Suffolk had certain high-born women who were influential in the communities they controlled and a greater number of lower-status ones who were nevertheless a significant social feature.