Bathing Beauties, Knobbly Knees and Music by the Sea: The Marina, Great Yarmouth 1937 - 1979 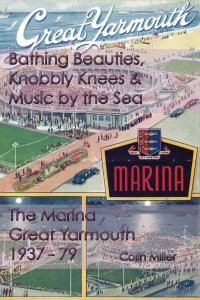 Anyone holiday-making in Great Yarmouth in the years immediately following World War Two will have fond memories of the Marina Theatre, an open-air music auditorium in a central position on the promenade that was once described as being the most wonderful site on the east coast. The fortunes of the Marina during its forty-three year existence mirror closely those of Great Yarmouth as a premier UK seaside holiday resort. In this book, the author traces in detail the rise and fall of the theatre, the rationale and politics behind its creation and ultimate demise, and the development of its unique and innovative style of entertainment as well as details of the musicians, variety acts and entertainers who performed there during its lifetime. Other subjects covered are the Marina’s involvement in seaside bathing beauty competitions, post-war Battle of Britain celebrations, fundraising carnivals and the attempted formation of a seaside municipal orchestra. The book is an important addition to the history of Great Yarmouth and district and includes information and topics new to readers interested in Great Yarmouth, and popular culture in the 20th century.

A sample is available below.