Monks Hall: The History of a Waveney Valley Manor 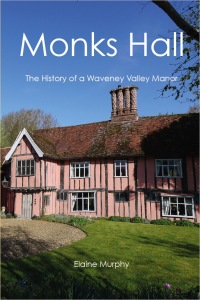 This story of a Waveney Valley manor house and estate is told through the lives of its owners, occupants and admirers, a tale that spans 1000 years and provides a fascinating social history of rural England in one place, extensively researched and written by someone with a love of the Waveney Valley.

The manor was unusually well documented from medieval times because it was owned by the monks at Thetford Priory, who kept a detailed record of expenditure and gave a description of a house recognisable today, despite its 16th century ‘renovations’. After the dissolution of the priory in the mid 16th century, a succession of owners and scientifically gifted absentee landlords neglected to modernise the hall, leaving it remarkably little changed over the centuries until it was restored and renewed in the 1930s.

The people who lived at Monks Hall weathered famine, riots, plague, religious intolerance and war; their family lives reflect the rigours of country living over a millennium.