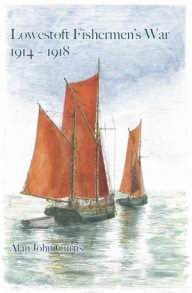 While other fishermen around the British Isles had similar stories to tell about their wartime experiences this is the story of the Lowestoft men and boys who found themselves in the frontline of the economic war with Germany.

During the First World War Lowestoft fishermen were required to make statements under oath to a Board of Trade official in order to seek compensation for losses. These unpublished statements, which were also used by Naval Intelligence in their vital work to defeat the U-boat menace from Germany, lay unresearched in the National Archives. Not all have survived, but those that have form the main primary resource material for this book. In examining these statements, the author, Alan John Curtis, provides an insight into what one might argue has been an overlooked area of the region's maritime history.

Alan came across the records while researching his family history. The family's ties to the history of the fishing industry in the town are strong. His grandfather, George Francis, being the last of the family’s driftnet fishermen, had married Barbara Isbister a ‘fishergirl’ from Shetland. However, it was through discussions with his father and his collection of books, old photographs and newspaper cuttings that inspired the initial research and in the end the writing of this book.