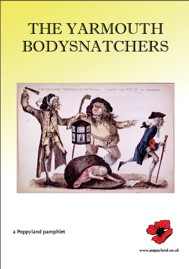 Competition among the London grave-robbing gangs was fierce during the early 19th century. As the demand for bodies increased, so the risks in obtaining them grew. As a result, professional body snatchers moved into the countryside where their activities were less likely to be detected. In 1827, they were to be discovered robbing Great Yarmouth’s graveyard. What made it more unacceptable was the involvement of Sir Astley Cooper, the eminent surgeon, who had been brought up at the vicarage in his youth.

The first of our new pamphlet series, looking at individual aspects of East Anglian history, explores this grizzly event in Yarmouth’s past.