The Baker Brothers: Diaries from the Eastern Front 1914-1919 - Oliver Locker-Lampson and the Cromer Men of the Russian Armoured Car Division 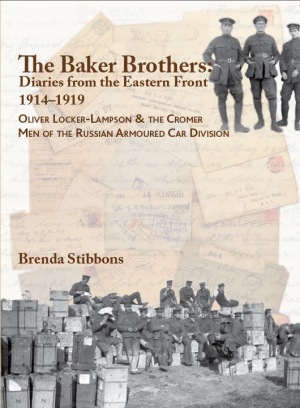 Many diaries were kept through the years of the First World War. In these we move to a little known theatre of war, The Russian Front, and the story of a private fighting force raised in almost the same way local troops were brought together in feudal times. Our focus is two dozen men from the town of Cromer who, together with others from East Anglia, Ulster and further afield made up the Russian Armoured Car Division. Their 'knight' was Oliver Locker-Lampson, Member of Parliament for Ramsey in Huntingdonshire, but with his home in Cromer he relied on justified local loyalty to gather the volunteers he needed.

With the support of his friend, First Lord of the Admiralty, Winston Churchill, a man not adverse himself to the adventures of war, he used his personal funds and his business connections to equip a Squadron of armoured cars. The Western Front proved an inappropriate place for them to operate and thus the men and cars were shipped to the Russian front, initially to support the armies of the Czar, before finding themselves wondering who their allies were. At that point they were withdrawn before being sent off to a further adventure in Mesopotamia, where the control of oil fields was the critical issue. Recruited as sailors rather than soldiers, the men were pleased to volunteer to be appointed Petty Officers at a rate of pay considerably better than those conscripted as privates in the Army.

Amongst these recruits were the three Baker brothers. Together with friends from the town they found themselves stuck in the frozen north for many months, then transferred to the heat of Turkey, Romania and Galicia. Their respective diaries and letters are woven together to tell a story with little dramatic fighting, and their distance from formal army regulations enabled cameras to be used freely. In fact keen photographer William Baker was charged by Commander Locker-Lampson to keep a record in pictures and his album provides the core of the picture record which accompanies the diaries and letters.