east anglian history books
Poppyland
Publishing
authors
back
<
More Norfolk Churches from the Air
The Baker Brothers: Diaries from the Eastern Front 1914-1919 - Oliver Locker-Lampson and the Cromer Men of the Russian Armoured Car Division
The Photographs of William Rayson Smith Volume I: Norfolk and Beyond
Cromer - Chronicle of a Watering Place
A Mundesley Album
>
also recommended 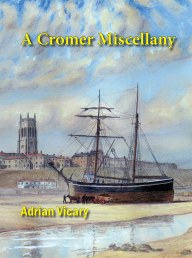 Philip Vicary was a faithful recorder of the town of Cromer in photographs and paintings through the 20th century. In addition he took the opportunity to make copies of many earlier pictures, both photographs and lithographs and it is because of his efforts that many of those pictures have come through to the present day. Lots of the photos we now see in Cromer books today were preserved because of Philip's diligence.

In A Cromer Miscellany his son Adrian brings together a selection from his own photos and those of his father. Some have not appeared in print before, such as the glorious images of steam locomotives at Cromer Beach station and the pictures of the first diesel cars to provide the Norwich-Sheringham service. It's a book that will be needed for any north Norfolk collection.