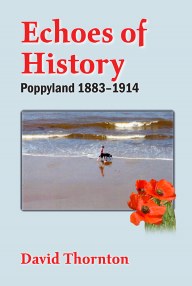 So what's in a name? Sometimes a great deal, as in the case of 'Poppyland'. We have a couple of other titles and a DVD which help explain how north Norfolk gained this name, resulting in an explosion in the number of residents and visitors at the end of the 19th century. In Echoes of History author David Thornton takes us a great deal deeper into the story. He introduces the various landed families who already treated north Norfolk as their summer playground. He then gives us an account of writer and theatre critic Clement Scott, who first visited in 1883 and coined the name Poppy-Land for his first article for the Daily Telegraph.

His meeting with 'Maid of the Mill' Louie Jermy and the coming of the theatre folk, the literati, the parliamentarians, the aristocracy and the industrialists extend the story into the 20th century as the small village of Overstrand become the 'village of millionaires'. And for those who want to delve even further, there re is a comprehensive bibliography of the many books written in the area or about the area.