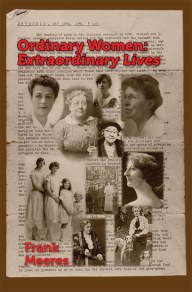 Ordinary Women, Extraordinary Lives tells true stories about Norfolk women in the first half of the twentieth century, at a time when women are just beginning to achieve equality in politics and in other spheres of life. The suffrage movement in Norfolk and women who risked prison is followed by chapters looking as women serving their country in the First World War but in very different ways - as nurses, as peacemakers. campaigning against the war itself. Chapters on the 1920s look at movement forward in the world of politics and then there are the accounts of a number of women in the Second World War, including some who found themselves involved in the Holocaust in a number of ways. The final chapter is about Eugenia Zagajewska, a Polish refugee who died in Norfolk in 1946.