east anglian history books
Poppyland
Publishing
authors
back
<
Wells in Pictures: Then and Now
King's Lynn and The German Hanse 1250 – 1550
North Sea War 1914-1919
Maritime Suffolk
When War Came to Wymondham 1939-45: What the townspeople experienced, said and did ...
>
also recommended 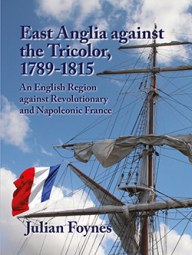 As the 18th century came to its close, Europe watched events in France with amazement and with fear. But many, including a good number of prominent East Anglians, welcomed the overthrow of the French regime, cheered the fall of the infamous Bastille and considered it time for a British republic. Three years later, the French Revolution had provoked a European war, with Norfolk, Suffolk and Essex becoming part of the front line. With one brief pause, it was a war that would last for 23 years. Author Julian Foynes brings together the story of the east of England for the years 1789 to 1815. Voices from parliament, sermons from the pulpit, orders for the army and navy, stirring tales, maps and illustrations are amongst the many sources on which he has called for his comprehensive account of part of East Anglia's history.