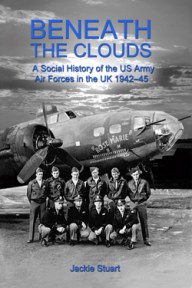 Beneath the Clouds tells how wartime life in Britain affected the fighting men and the ground personnel of the American air force. Many fliers and ground crew did not know where they were going until their sealed orders were opened; it was a culture shock to arrive at the airfields of East Anglia in a country which had already been at war for three years.

Beneath the Clouds is a social history of the US Army Air Forces in the UK 1942-45, a story of life in a different country, the morale of the men, their lives, loves and losses as they took up the bombing campaign against Hitler's European stronghold. Whether you're a veteran who served or have a specific interst in social history, it will be fascinating reading. And of course for all those descended from those veterans, it will be an insight into their fathers' and grandfathers' lives. Hear Jackie Stuart talk about this title: