Honor, Win and Judse took their Brownie cameras with them on their holiday just like modern tourists might do today (although the majority now carry the equivalent technology in their mobile phone). Can we determine anything from these photographs? 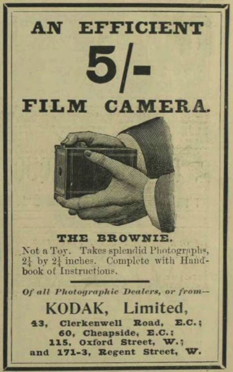 The Box Brownie was invented by Frank A. Brownell in 1900 and over 150,000 were sold in its first year of production. In the UK it cost 5 shillings, was made out of cardboard covered with leatherette with a simple meniscus lens and took 2¼ inch square pictures on 117 roll film. An improved Brownie No. 2 camera came out in 1901 and cost twice as much (10 shillings) and produced 2¼ by 3¼ inch photographs. The album contains both size images meaning that both a type 1 and type 2 camera was used by the young women. As to who put the album together, the heading on the first page gives us a clue – “The Caravan Trip. Judith, Honor and Self”, suggesting it was Win.

It’s difficult to say who took the photographs but one page is entitled, “Some of Judse’s photographs” and are taken with a type 2 camera. Since Judse appears in one of these photographs it’s clear that the cameras were swapped around. One photograph on this page is captioned, “Kie, me, Sie, Win” suggesting it was written, at least, by Honor (in the captioned photos Honor is wearing a light coloured hat with a dark ribbon).

In total Judse appears 18 times, Honor 9, and Win 7. Win appears most in the square (type 1) photographs with Judse, while Honor only appears in the rectangular (type 2). It may therefore be that Honor owned a type 1 Brownie and Win the type 2.

The majority of photographs in the album are of the three girls, Canham the manservant, and those that visited the travelling party, however there are some general shots, 4 of Blakeney and its quay (2 each taken on the two types of camera) and 3 clearly taken from the rowing boat on Horning Broad. Like many families on holiday, they seemed to be interested in recording themselves on holiday rather than the places they were visiting, except when they saw something of special interest–such as a wherry passing by, or the unloading of a Lynn coal boat at Blakeney. 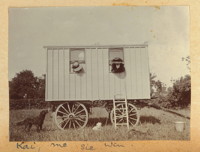 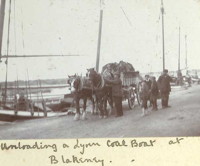 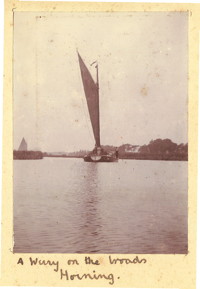